We think it's great that Promise.allSettled is available for developers by now already, it arrived with ECMAScript 2020. And because of that, we quickly want to share some examples showing the main differences between Promise.all and Promise.allSettled in everyday use for everyone asking himself one of the following questions

Comparing 'allSettled' and 'all' by example

ECMAScript 2020 provides us with a new feature method Promise.allSettled which gives us more convenience with things that we could already accomplish before, but not so elegantly. So what does it do and what is it good for?

Promise.allSettled takes in a list of promises and gives us a new promise, that resolves as soon as all of the input promises completed (no matter if they were resovled or rejected). So let's say we want to make two parallel API calls and wait for all of them to complete. Let's see how Promise.allSettled can help us out.

Let's first fake some API calls by just creating three promises as if they would represent API requests. They need different amounts of time to complete and one of them even fails.

Imagine we are waiting for the result of that group of API responses. We could do that with Promise.all and with Promise.allSettled, right? Yes, but depending on what you want to achieve one of them will be the better fit. Let's look at what happens with those three fake API calls.

This will result in the following order of events

Here is the output of our code above

What Promise.all does here

Promise.all waits for all promises to resolve and will then resolve itself. The important thing here is how rejections are being handled. When one of the passed promises rejects, the promise returned by Promise.all will immediately reject without waiting any longer for promises that are still pending. 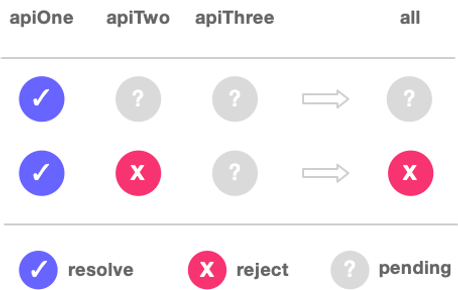 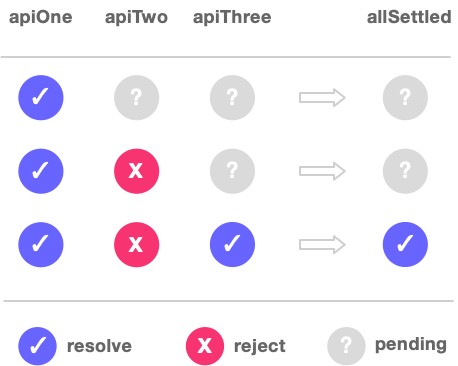 There are other differences, for example in the result we get. Promise.all gives us an array of values if all promises resolve and an error as soon as one of the promises rejects. Assuming all three promises would resolve in the example above, we would get

If there is a rejected promise, we get the rejection reason from just that one promise from the list that rejected first

Compared to that, Promise.allSettled gives us an array of objects with a little more detailed information on what has happened and what where the reasons for failure. Like above, assuming all three promises are successful, we get 'status' and 'value' for each promise

If there are rejected promises, the result object will hold 'status' and 'reason' of the rejection

When to use what

That depends on what we want to achieve. If 'all' or 'allSettled' is the right choice will be determined by the underlying logic we intend to implement. When looking at what is right for a specific case there will usually be at least such other methods like Promise.race and the also newly added Promise.any that might also be what we need.